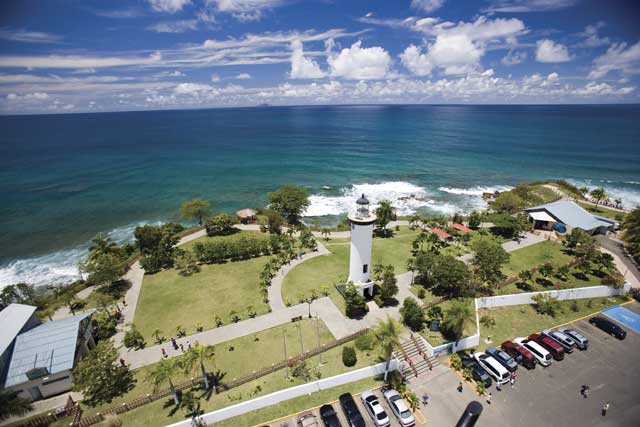 A lighthouse has been standing at the same location since 1892. The original lighthouse, which was one of the many lighthouses built to help ships navigate the dangerous sea passage along the western coast, was damaged during an earthquake in 1918. From old photos that I have seen, it was beautiful made of brick with nice details and included a house for the lighthouse keeper’s family. Due to the damage caused by the earthquake, it had to be demolished, and the current 70-foot tall cylindrical tower was built in 1922. The Punta Higüero lighthouse was designed by José María Sainz and built on high ground at the westernmost point of the island to guide ships navigating Mona Passage. While other contemporary lighthouses were of the neoclassic style, the Rincon and Guánica lighthouses had elaborate brick cornices and parapets. Stone walls were covered with white stucco which imitated the baseboard rocks. Its Mediterranean appearance came from an elaborate combination of exposed and indented brick work in the faces, around doors, windows and corners. The castle look was further emphasized by reddish stucco imitating stone-work on all facades and the very elaborate exposed brick cornice topped by a parapet built in lace-like brickwork. The replacement lighthouse was completed in 1921 was placed in commission on January 12, 1922. It was constructed near the first lighthouse, which was then demolished. The lighthouse was automated in 1933. The keepers residence and other structures were later destroyed by fire. A buoy light (shown in the pictures) was later installed later and used until 1978. It is now kept at the Coast Guard Museum in San Juan.  It is so pretty watching the sun paint colors in the sky as it sets, slowly dipping below the horizon. The park around the lighthouse provides a great view of Desecheo Island, which makes a great backdrop for your own photos. 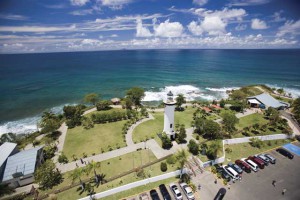 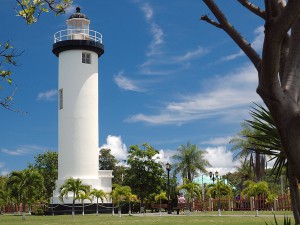 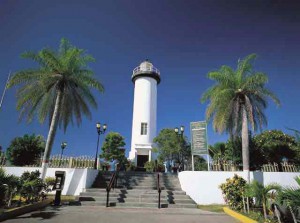