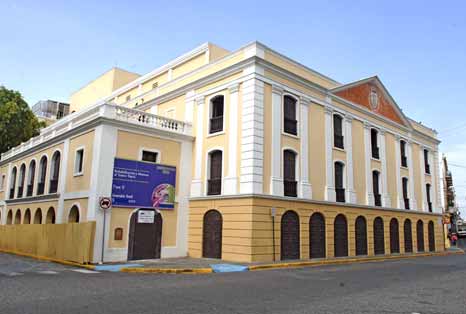 It is the oldest building as a dramatic setting that is still in use in the United States. Looking east, in front of Plaza Colón on Calle Fortaleza, whose construction began on September 21, 1824. Its architecture represents the neoclassical style that comes to mid-eighteenth century and that prevailed until the mid-nineteenth century, which aims to restore the standards and tastes of the Greco-Roman classical style. In this theater have represented a lot of operas, plays, operettas, ballet, as well as a variety of musical performances. In 1824, due to the lack of adequate space for the representation of plays on the islet of San Juan, Governor Miguel de la Torre asks the City Council to approve the construction of a public theater.  El Teatro Tapia has gone through various stages of remodeling over time. In addition to those that took place in the years 1873, 1948, 1976, the last of which is the 2006. Reconstruction was in 1948, under the administration of Mayor Felisa Rincon de Gautier, when the Teatro Municipal or Colosseum, called the Teatro Tapia, in honor of the noted playwright and novelist of the nineteenth century. The arrangements were carried out in 1976 were to return to the theater its original façade and modernizing the interior. The most recent renovation began in 2006 and took about two years. Its doors opened again in August 2008. Throughout its history, the Teatro Tapia has seen a lot of shows and popular classic character and hosts numerous theater festivals such as the Festival of Puerto Rican Theater and International Theatre Festival, both created by the Institute of Puerto Rican Culture.