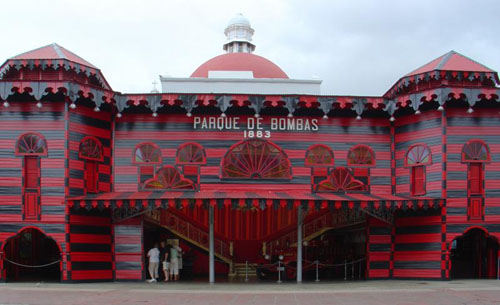 The building housed the city’s main fire station for many years, and it is now a museum. Its name comes from the mobile hand-pumped fire fighting units the building once housed. It has been heralded both for its historical and architectural roles in Puerto Rican society. Parque de Bombas is one of the most recognized buildings in Ponce and is probably up there with El Morro Fort when it comes to landmarks of Puerto Rico. The building was designed and built for the 1882 Exhibition Trade Fair and by 1885 it had become known as Ponce’s official fire station. Today, Parque de Bombas serves as a museum as well as the local tourism center for Ponce. The station continued to serve the city of Ponce until 1990, lasting a total of 108 years as a fire station. On that year, the station’s fire-fighting duties were fully transferred to another nearby station, and the building was officially converted into a fire-fighting museum. The architect in charge of its restoration was Pablo Ojeda O’Neill. Parque de Bombas served Ponce ass the main fire station until 1990 when it was decommissioned. The building is located in the city’s central “Las Delicias Plaza” and it is attached to the Cathedral of Ponce at its rear boundary. Structurally, it is a wooden frame building with a pitched roof covered with galvanized zinc sheets. Exterior cladding is horizontal 1″ by 6″ wooden siding. Doors and windows are wooden. The windows are of the fixed louvered type, long, narrow, and crowned by an oversized fixed fan light. 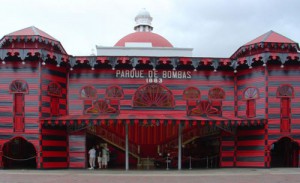 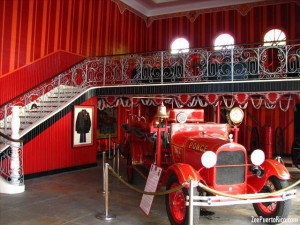 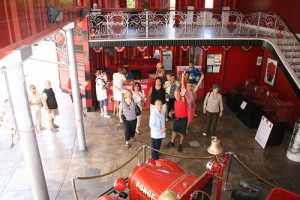