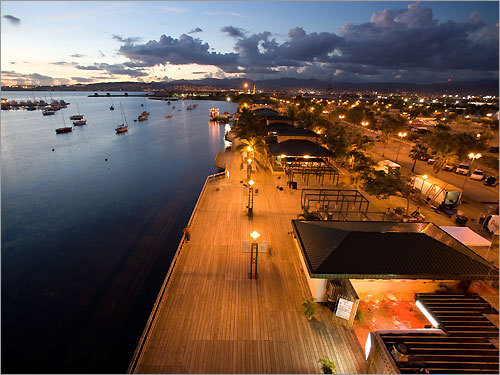 It is a boardwalk in the La Guancha sector of the Playa barrio in the city of Ponce, Puerto Rico, facing the Caribbean Sea and built under the administration of Rafael Cordero Santiago, Mayor of Ponce from 1989 to 2004, at a cost of 2.6 million dollars. It was inaugurated on June 23, 1998. It receives over 750,000 visitors a year. June 27, 1991. By Elizabeth Roman. Retrieved May 16, 2010. Іt wаs inaugurated оn June 23, 1998.Inauguration Date Retrieved July 16, 2009. Іt receives оver 750,000 visitors а year.Humedad y deterioro: Pasan factura al Tablado La Guancha. Jason Rodríguez Grafal. La Perla del Sur. Ponce, Puerto Rico. 27 April 2011. Retrieved 27 April 2011. It’s basically a boardwalk filled with many different local eateries. They mostly sell delicious “fritters”, like what we call “bacalaitos”, or fried cod fish. There are also “empanadillas”, which are basically fried meat or cheese filled turnovers. Apart from the food, the boardwalk is a great place to relax and take a light stroll. At one end of the boardwalk there is a lookout tower, giving an elevated view of La Guancha. You can see many big fish. These are not the prettiest, and do something really weird with their mouths once in a while. Just outside of the boardwalk there are fun playgrounds for kids and a cool arcade. Ponce’s beach is very near the boardwalk, you can even walk to it. 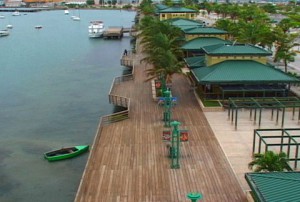 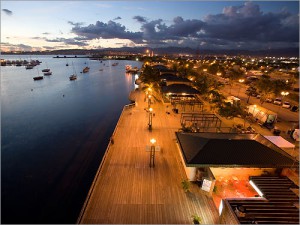 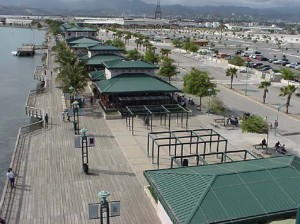